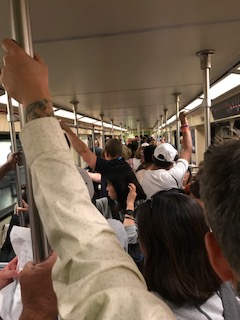 This picture speaks for itself. Yesterday, it was unbearably crowded. As I held my breath for what felt like forever, I thought to myself: something’s got to give.

When I first arrived to LA 37 days ago, I thought the metro was super convenient, quick, easy, and would save me the stress of being stuck in traffic. Which, truthfully, it still is all those things for the most part. However, I also forgot how much of a germophobe I am, which makes touching anything on the underground a huge no-no. Seeing that the metro drivers couldn’t care less about how averse you are to germs, the violent jerking of the train gives you no option but to either get the ultimate workout by clenching every single one of your muscles in order to not topple over, or hold onto the dreaded poles that are there for support.

Also, people have no sense of personal space on the metro. Growing up in North Carolina, I’m not used to people standing in such close proximity. It makes me feel tense, and I automatically feel the need to hold my breath when that happens; almost as if I don’t want our existences to interact any more than they already have.  One time, I felt so claustrophobic that I got off the metro four stops early and walked home (which btw took me 40 minutes).

Another thing that pisses me off about the metro? The fact that there’s zero transfer time. My daily route to USC from Hollywood to downtown requires me to ride the red line, and then transfer to the expo line at 7th Street Metro Station. In the mornings, things usually flow pretty seamlessly. In the evenings, getting through the massive crowd transferring from the expo line to the red line is damn near impossible. I know it’s only a 10-minute wait until the next train, but in the evenings when I’ve had a long day and much to accomplish when I get home, every minute counts.

I know these are such diva complaints since the metro provides me, and millions of others in LA county, with the convenience of cheap travel, but can you really blame me? This NC girl hasn’t quite gotten the hang yet of public transportation.